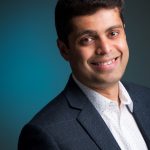 Ajay began his career as a Technologist at QinetiQ UK contributing to the development of CFD and performance models for rotorcraft (2005 – 2007), was part of the Zephyr solar-powered aircraft team which broke the endurance record in 2008 achieving sustained flight in 2008 and the Sea King helicopter Carson Blade Programme for increased performance of the Mk4 and Mk7. Between 2010 and 2014, Ajay lead the airworthiness and structural integrity activities for the Army and Navy Lynx Wildcat helicopter development programme.

At Facebook (2014-2018), Ajay was the Airframe Manager for the Aquila high-altitude aircraft programme aimed at delivering a stratospheric platform capable of delivering connectivity in regions lacking fibre-optic infrastructure.

In 2018, Ajay joined the Transport Systems Catapult (now the Connected Places Catapult- CPC) to lead their Unmanned Aviation R&D and industry outreach activities. In this time, he lead the delivery of the UK UAS Traffic Management (UTM) framework and the drone Pathfinder Programme.