For last several years a great deal of effort has been poured into developing a system that will help manage drones flying along with other airspace users. Known as UAS Traffic Management, or UTM, the goal is to create a system that can integrate drones safely and efficiently into air traffic that is already flying in low-altitude airspace. That way, drones that are carrying packages won’t interfere with helicopters, nearby airports or even safety drones being flown by first responders helping to save lives.

In 2015, NASA recognized the need to develop UTM-related technology, and thus launched a series of increasingly more complex tests and evaluations called Technical Capability Levels (TCL).  NASA partnered with industry and along with designated FAA UAS Test Sites, developed a UTM framework that among other things deconflicted operations, shared flight operation information, ingested surveillance data, and created dynamic restrictions.  The multi-year TCL effort concludes in August 2019 and the lessons learned and the capability developed will be transferred to the Federal Aviation Administration (FAA). Throughout the TCL collaboration, NASA has provided research and testing results to the FAA, which will ultimately put this knowledge to use in the real world.

For UTM to be effective, it must create an ecosystem that connects all stakeholders and participants to allow the necessary interactions and data flow. Stakeholders and participants can be placed into following four categories: Air Navigation Service Providers (ANSP), Privileged Users (Public safety, State and Local), UTM Service Providers (UTMSP) and UAS Operators as depicted in Figure 1. In this example, the ANSP assumes the responsibility of providing services such as discovery, registration and authorization for drone operations.  Industry assumes the responsibility of providing services ranging from accessing weather information to connecting drone pilot’s to ecosystem.

ANSPs around the world are considering stakeholder roles and responsibilities within a UTM system architecture, and it appears there is not a singular, common solution.

Just like the effort in US, parallel efforts have recently started in Europe that are charging ahead at full speed. In May 2019, Europe agreed on a set of rules and procedures to operate drones. These rules will be implemented by Member States and the European Aviation Safety Agency (EASA) by mid-2020. The European Commission together with EASA have agreed to closely work with Member States to develop, as a matter of urgency, an institutional, regulatory and architectural framework for a competitive UTM services market. This version of UTM in Europe is called U-space, in which the concept of FIMS is also present.

The U-space could be defined as a digital system delivering a set of automated functions, services and procedures to ensure safe, secure, sustainable and efficient aircraft operations in a specific volume of airspace. U-space is an enabling framework designed to facilitate any kind of routine mission, in all classes of airspace and all types of environment – even the most congested – while addressing an appropriate interface with manned aviation and air traffic control. In support of this initiative, in 2017 the Single European Sky ATM Research (SESAR) Joint Undertaking drafted the U-space blueprint, a vision of how to make U-space operationally possible. The blueprint proposes the implementation of four sets of services in a progressive way to support the European Union aviation strategy and regulatory framework on drones:

What are the challenges?

The UTM system will be a bit different than the air traffic control (ATC) system used by the ANSP and Civil Aviation Authorities (CAA) for today’s commercial air traffic. UTM will be based on digital sharing of each user’s (or pilot) planned flight details. Each UTM user will have the same situational awareness of airspace. An important component of the UTM ecosystem is the Flight Information Management System (FIMS) – a critical capability that is sometimes misunderstood or inaccurately described.  What follows is a description of FIMS from the perspective of a company that currently deploys this capability, today.

FIMS is a gateway for data exchange between UTM participants and ANSP and CAA systems (ACS), through which the ACS can provide directives and make relevant National Airspace System (NAS) information available to drone 0perators via the UTM network. The ACS also uses this gateway as an access point for information about operations (as required) and is informed about any situations that could have an impact on the NAS. FIMS provides a mechanism for common situational awareness among all UTM participants and is a central component of the overall UTM ecosystem.

FIMS is a central, cloud-based component that acts both as a bridge to the NAS and as a broker of information between stakeholders and participants. Connections to the FIMS are made via a UTM Service Provider (UTMSP) that meets minimum certification requirements for functionality, quality of service, and reliability that will most likely be determined by CAA’s (e.g., FAA).  These UTMSPs support the entire life cycle of a drone mission flown by UAS operators. Data connections and communications between the UTMSP and FIMS are internet-based and built on industry standards and protocols to ensure interoperability between multiple instances of UTMSPs.  FIMS also acts as a central entity to which ATM and public services – major stakeholders – can directly input requests that affect the airspace, such as restrictions, but also extract information from the UTM system. For example, emergency services may need to restrict drone access to a geographic area due to a manned helicopter conducting an emergency flight landing to pick up an accident victim.  Public services will be able to extract historical data regarding drones, such as flight path telemetry in the case of investigating a mishap.

A FIMS encompassing system in a UTM context should logically support the following functional capabilities:

Even though these functions can be attributed to FIMS capability, the deployment model for these functions can vary significantly and each of the features can be centralized or federated and this can move out from the ASNO realm to the UTMSP realm. For example, tactical deconfliction in a federated architecture is more complex because the deconfliction algorithms must be universally standardised and adopted by all UTMSPs. This is similar to a problem that industry has already encountered for TCAS / ACAS avionics in commercial aviation.

Impact on FIMS for Centralized vs Federated Architecture

There is an ongoing discussion about whether the most effective UTM architecture is centralized or federated.  The correct answer is influenced by many factors, to include the geographic region, regulatory environment, and business models prevalent in that area of deployment which is most likely a nation-state. Consequently, the FIMS and the UTMSP roles and responsibilities may vary significantly based on whether it is a part of a centralized solution or federated solution.

For the most effective UTM solution, we recommend a blended architecture, one that is tailored by using elements of centralized and federated capabilities.  This requires the FIMS play a central role in arbitrating air traffic management for manned and in some cases unmanned traffic in a mixed-use airspace when necessary, and acts as the authorized single point of reference for critical manned air traffic information. Despite this centralization of some services and responsibilities, in a blended model UTMSPs are federated to maintain an opportunity to compete within Government defined regulations to deliver additional, added features to their customers and foster innovation.

A blended model provides several advantages in terms of clearly assigning and controlling the safety-critical airspace management functions in an unambiguous and efficient manner, thus reducing the need for complex information exchange requirements across a wide range of UTMSPs.  In some cases, the CAA will want to retain those services within a centralized FIMS, in other cases it may want to shift elements to the UTMSPs.  When centralized the requisite (and emergent) safety standards are easier to validate and UTMSPs are able to provide efficient services to drone operators using a consistent data source without having to rely on UTMSP- UTMSP collaboration to share positional and mission planning details.

Figure 2 depicts how there is a relative shift of FIMS responsibilities depending on the approach.

There are multiple stakeholders in a UTM network and UTMSPs need to communicate directly amongst themselves in addition to communicating with the FIMS. This is a capability enabled by the federated approach and is crucial to reduce communication latency and unnecessary information sharing. For example, a UAS operation flown in Boston does not need to be shared with a UTMSP in San Francisco, but it does need inter-communications with other local UTMSP operations in the Boston metroplex.

In the case of over overlapping service areas, UTMSPs can share new operation announcements, operator activities when necessary (e.g., non-conforming flights near their own operation), and relevant flight information when two flight operations intersect. The regulator also has a direct means of interfacing with the system, to process or examine logged data, provide authorizations and approvals, and oversee general UTM processes. The regulator may also have a means to modify regulations that may be encoded into the FIMS, potentially allowing for regulations to be implemented in a digital and agile manner in the future.

One aspect requiring further consideration is that when employing centralization of key services, FIMS becomes a single point of failure.  This vulnerability requires failover technologies and back up plans to reduce disruptions and lower risks to acceptable levels. 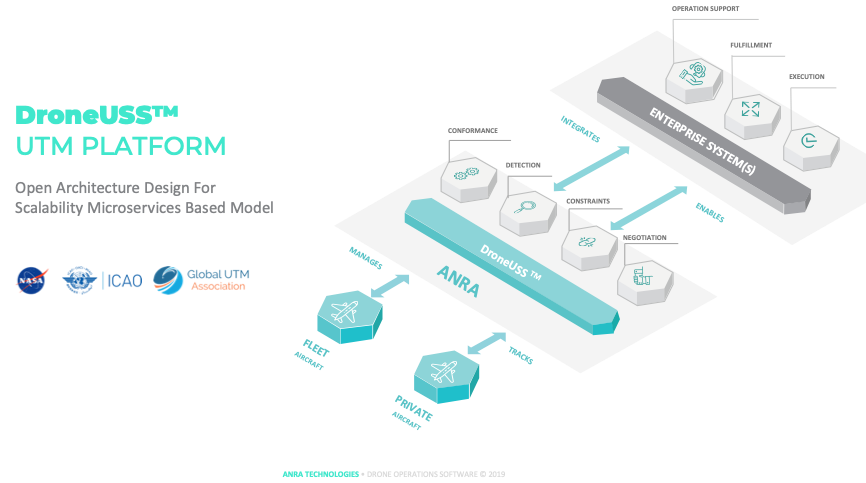 Many features of FIMS capability are readily available to ACS from technology providers like ANRA. This provides ongoing manned aviation operations a means to coordinate air traffic and ultimately improving situational awareness.  One consideration is integrating with existing, legacy ATC systems to provide relevant information to the UTM ecosystem without overwhelming ATC.  Recall one of the key principles of UTM is automation and so there’s a reluctance to flood ATC with drone data that is of no value or significance.

There is not a one size fits all FIMS solution.  Instead, we recommend a FIMS solution that adapts to a UTM architecture that must consider the CAA’s regulatory and business models. Regardless of what approach is used, the FIMS must be able to perform as the airspace management facilitator to connect stakeholders, simplify information exchange requirements between UTMSPs, ANSPs and public services and help plan the most efficient use of airspace whilst maintaining the highest levels of safety.

For more information and to learn about ANRA Technologies, please visit www.flyanra.com