This week, the first part of Phase 3 of the UTM project – that’s UTM TCL 3, for those in the know – took place on Virginia Tech’s campus. Here’s why this next phase is different.

The more- and more precise- methods that drones have to see, communicate, and deconflict the safer the airspace will be: and that’s exactly what’s being tested, successfully, right now. It’s not just about sense-and-avoid technology like we’ve seen in automated drone systems before. In these tests, researchers used drone-mounted compact radar systems, provided by Echodyne. These systems can show the distance and direction of an obstacle, and they still work in bad weather. Additionally, participants tested dedicated short-range communication, or DSRC, radios typically used for ground based intelligent transport systems. ANRA’s DroneUSS UTM system integrated both the radar, DSRC radio as well as drone telemetry into the traffic management platform. The idea is that USS (UAS Service Suppliers) like ANRA can serve as the intermediaries between commercial drone operators and the FAA or other aviation authorities around the world; right now ANRA is one of the leading USS that integrates the sense and avoid capabilities like DSRC radio, ADS-B and radar information in addition to cooperative deconfliction. 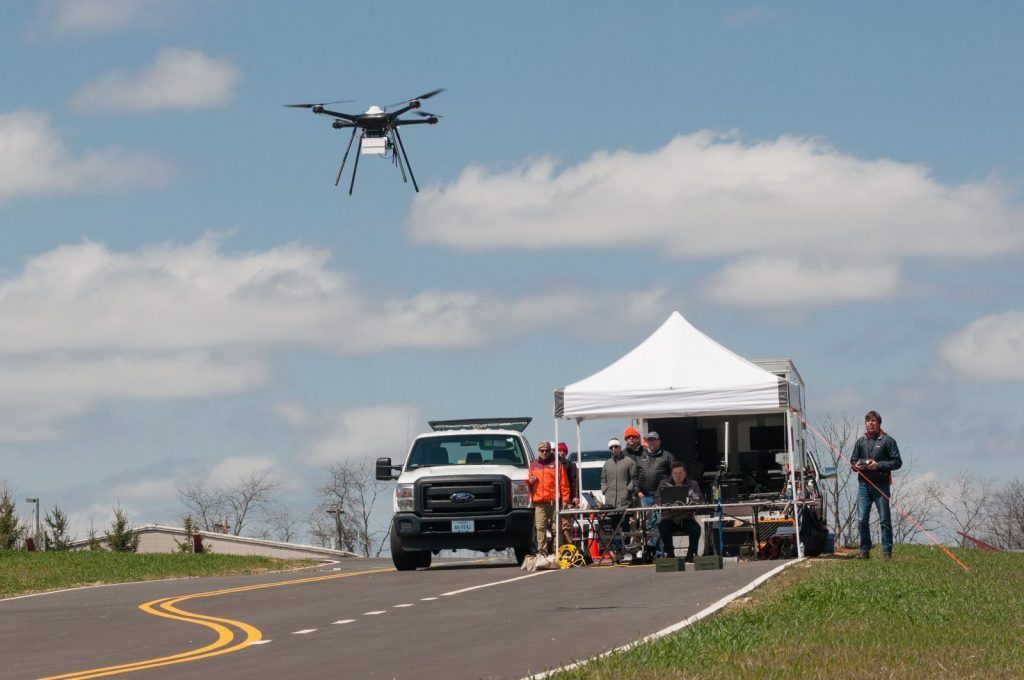 Here’s how the testing works: researchers set up a scenario and run it through. They take notes along the way and hope nothing goes wrong. (Nothing dramatic has happened.) They add more elements, make it more complicated, and move on to another and increasingly complex test. This time, testing didn’t only include aircraft. Researchers used the “Virginia Smart Road,” where VT researchers test automated ground vehicles, to include a self-driving car with a low-altitude UAS in the scenario.

“With the drone market expected to have exponential growth over the next few years and a large numbers of anticipated users, one of the key needs is to have a system that does not require constant human monitoring and surveillance and can still ensure the safety, security and control of the drones in the low-altitude airspace,” says Ganjoo. “The system should be capable of providing the human stakeholders the data to make strategic decisions related to mission management whether it is launch, execution, and/or termination of airspace operations. The procedures and interfaces also need to ensure that only authenticated and approved UAS can operate in the given airspace.”

It’s all amazing technology: and USS are proving themselves at keeping multiple aircraft safe, successfully deconflicting and prioritizing even when the unexpected happens. While the acronyms can be cryptic and the technologies complex, this is exciting stuff – or should be – for commercial operators everywhere. The closer we get to the elements of a functional and robust UTM system, the closer the world gets to true drone integration and widespread enterprise adoption of drone technology.