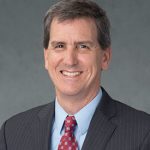 Michael has spent his career in aviation, first as a lawyer for TWA in New York and Washington, then working for 15 years at United Airlines in Chicago where he rose to Senior Vice President of Alliances, International and Regulatory Affairs.
In 2009 he left United Airlines to become Group CEO of InterGlobe Enterprises, India’s largest travel conglomerate and operator of IndiGo Airlines, based in Delhi. After returning to the U.S., Whitaker was appointed by President Obama in 2013 to serve as Deputy Administrator and Chief NextGen Officer of the Federal Aviation Administration, where he was responsible for the modernization of the air traffic system and worked closely with Administrator Huerta in running the world’s busiest, most complex and safest air traffic control system.